Over the weekend I signed and sold my books at one of my favorite events, the Lewisburg Literary Festival. Lewisburg is up at the top of my favorite places in WV, and a big reason for that is their appreciation for books expressed in this fun annual event. (Re: the title of this post, Lewisburg was named America’s Coolest Small Town by Budget Travel in 2011). I took a few pics and thought those of you who weren’t there would want to see what you missed out on.
Here are some pics of a few of the vendor tables in the “Bookstore” area of the festival (in the Greenbrier Valley Visitors Center—this is prior to the event, which is why the room is so empty.

Above, on the left is mystery writer Nancy Swing, who was directly across from my table and was a good conversation buddy for the weekend. On the right is Jillean McCommons and George Brosi of Berea, KY’s Appalachian Mountain Books. I was really impressed with their selection of books by WV writers, many which are out of print. They had quite a number of autographed copies (I ended up buying only one book from them, though I wanted many more). Very cool fact that I didn’t realize until I got home: George Brosi used to be the editor for Appalachian Heritage! How cool is that???

^^^I found this hardcover autographed copy of The Unquiet Earth by one of my favorite authors of all time, Denise Giardina from Appalachian Mountain Books.

^^^This is just beyond the front entrance for the Visitors Center. You can see near the center of the photo is Carter Taylor Seaton; just to her right is Cat Pleska of Mountain State Press. (I’m not sure who that is to Cat’s right, though)

^^^Just to the right of my table was Ashlea Ingram at her table for Turtle Shell Publishing (formerly Faith By Grace Publishing). Howdy neighbor!

Here I am at my table! Nancy did me the honor of taking my picture. Before that, I took one of the table without me:

All those above I took on Friday afternoon, before things started happening. Also, apologies to the great vendors at the event that I failed to photograph. I actually don’t like going around and taking pictures all the time; I prefer to enjoy my life through my own eyes rather than a screen. So I didn’t really get a lot of pictures, and the main reason I even took the pictures of those tables up there were because they were easily seen from the chair behind my own table. 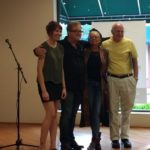 ^^^Contributors Mesha Maren, Doug Van Gundy, and WV Poet Laureate Marc Harshman read selections from Eyes Glowing At the Edge Of the Woods (there was one other very talented and fantastic woman who read some of her stuff but I’m ashamed to say that for the life of me I can’t remember her name). Very cool when Marc read some of his poetry with Doug playing fiddle in the background. I thought I had gotten a picture of that but it appears I didn’t (again, actually being present for moments rather than fiddling with a camera). Fun facts about Doug Van Gundy—he’s from Elkins, which is not very far from where I live, and I’m pretty sure he once won some money on Who Wants To Be A Millionaire.

Friday night was the tribute to Bob Dylan at Hill & Holler. I first arrived well before the tribute, thinking I would get a meal there first. However, the line was insanely long, so I went the cheap (but tasty) route and grabbed me dinner at Taco Bell!

Back at Hill & Holler, I got one terrible picture of one of the performers from way in the back:

You can barely see anybody on stage from my picture, sorry. Anyways, it was all songs and poetry by Bob Dylan played and read by locals. I was impressed with how good the Lewisburg musicians are. It was great fun. I was standing next to Marc Harsman the whole time, who remembered my name from when he met me earlier that day, and was very friendly and didn’t make me feel like I was any less important than himself, even though he is a much bigger deal from my perspective. Very cool dude!
Saturday morning I found out that I had locked my keys in the car before going inside. Fortunately, my friend with whom I was staying knows how to break into vehicles. I had planned on getting to the Visitors Center early, which is good because when he got my car opened I still had plenty of time.

There were a couple workshops going on in the Visitors Center (one in the morning by Eliot Parker—I meant to attend and my half-dead morning brain totally forgot about it; another in the afternoon by Mesha Maren which I was able to attend).

I missed Morgan Spurlock‘s presentation at Carnegie Hall, but thankfully I didn’t miss the interview with Dr. Azar Nafisi, who was so inspirational and humble and apparently a very genuine, beautiful person. Having lived in Iran, she has such an interesting perspective on life and America.

There was a lot of other stuff going on around town, much of which I missed by sticking at my table most of Saturday.

I want to thank all the writers, readers, and the great folks who put this together. Especially to Eric Fritzius, who was everywhere at once and has been a key figure in West Virginia Writers, Inc., as well as one of the persons involved in organizing this festival (I know there are plenty others, but Eric is the one I had the most contact with during the event, and the only one I know by name off the top of my head). Thanks for finding me a table, and also for always knowing whether I’ve paid my dues to WVW or not when I forgot.

Can’t wait for next year!

One thought on “Literary festivities in America’s Coolest Small Town”