Another podcast recommendation! Listen, I got so excited about H.P. Podcraft because I had just discovered it, and then I later realized that somehow I haven’t told you guys about one of my favorite standbys, Crime Time Podcast.

I first found out about Lee and Eddie’s podcast focused on crime and horror fiction when they interviewed Ian Rob Wright, a popular self-published horror author (who has quite a bit of free stuff over at his website). They’re two Australian girls that just, you know, talk about crime fiction and horror. They’re pretty funny, and like the guys over at the H.P. Lovecraft Literary Podcast, often point me towards new stuff I hadn’t had on my radar, and also often discuss other books and authors I already know and love, so every couple weeks I end up bombarding their twitter with comments relating to the episode I’m listening to (sorry girls). They usually respond, too, so it’s like, I feel like we’re best friends that I’ve never even met. (Well, I don’t know if they would say I’m their best friend, maybe more like that annoying kid that follows you around everywhere and won’t shut up.) For a while I would get confused because for some reason I couldn’t tell the difference in their voices, but I’m just now finally starting to pick out the one from the other. They say they even have different accents, but all Australian sounds the same to these American ears. But they say cool Australian things, like “good on ya” and other things that you are only allowed to say if you’re Australian. I wonder if they like vegemite…
I want to take this moment to share with everyone that there is an Australian member of my own family:

This is Canaan, my wife’s Australian cattle dog. So you see, I love Australians. Here’s another: 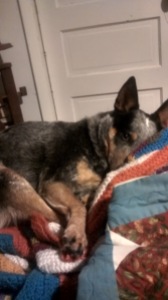 Anyway, where was I? Oh yeah, Crime Time Podcast. Go check it out, if you love Australians or if you love crime or horror fiction, or both. As they would say, “get amongst it.”

One thought on “Crime Time Podcast”