I found an old box of discarded books and fished out Eight Modern Essayists, edited by William Smart, noticing George Orwell in the Table of Contents. 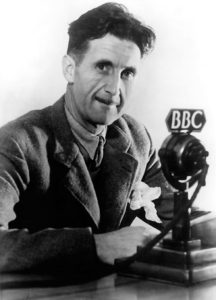 Orwell is one of my favorite writers (in fact, his 1984 greatly influenced my direction in writing When the Watcher Shakes), but I had not read any of his nonfiction. Being a writer, I was immediately drawn to “Why I Write”, which I would recommend to anyone wanting to understand more behind the man and his work. However, I loved “Politics and the English Language” even more. In it Orwell decries what he sees as the English language’s decline into unintelligible jargon and vague, nonsensical circular sentences. His purpose is to show how we obfuscate our language in “defense of the indefensible” by softening starkly dishonorable politics with “euphemism, question-begging and sheer cloudy vagueness.” As our expression becomes lazy and vague, he argues, so does our thinking, which leads to even more lazy writing and speech, and so the cycle spirals downward.

While Orwell is primarily addressing political writers here, and not necessarily fiction authors (“I have not here been considering the literary use of language, but merely language as an instrument for expressing and not for concealing or preventing thought”), his condemnation of unclear writing and advocation for concrete, precise language is gold for any writer, whether he be a journalist, essayist, or novelist. He kicks the writing crutches of jargon, dead metaphor, pretense, and passive writing out from our feet and tells us to learn to walk on our own effort, because that is the only way we’ll reverse the destructive cycle.

After going into detail on weak kinds of writing, he gives some basic rules to writers to help cure our disease:

I would quote more excerpts but I’m afraid I would only end up copying the majority of the essay. Fortunately, you can read the essay in its entirety online. I guarantee it will improve your own use of language, and if you can do that, he says, you may also improve your and others’ thinking.