Ever since I was assigned to read Orwell’s 1984 in high school, dystopian fiction has been one of my favorite literary genres. With The Hunger Games and Maze Runner series having captured American pop culture’s admiration, dystopian lit (or, at least, YA dystopian) is now a favorite of many others.

Before YA Dystopian was as big as it is today, M. T. Anderson wrote Feed, published in 2002 by Candlewick Press (in 2012, they released a newer edition, pictured below, which I have not read–as far as I know, all they changed was the cover). 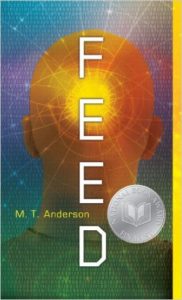 Feed is still one of my favorite dystopian works, since I believe it is much more relevant to the societal problems and dangers we face today. Instead of the typical (and, yes, still relevant) dystopian fare of corrupt and totalitarian Big Government spying on, censoring, and deceiving the public (per 1984, The Giver, Fahrenheit 451, all great classics I heartily recommend), Anderson imagines a world where tech corporations have bought and wrecked the globe. Technology is advanced to the point where kids get chips implanted in their brains in order to connect to the feed, which is basically a global wifi connection that you can access with your mind. This gives people who are connected to the feed (which is basically everybody with enough money) instant access to a virtually infinite supply of information.

As a result, nobody needs to remember anything or think critically anymore, since they can just look it up on the feed. Instead of going to school to learn how to think for themselves, they go to School™ to learn how to use the feed. People can message one another using the feed, like a technology-powered telepathic SMS. They can even share memories back and forth. Instead of watching television, people will get their entertainment sent straight to their brains by the feed. Instead of getting high on drugs, kids will use their feed chips to access websites that let them “malfunction,” or “mal” for short. One can buy about anything over the feed, and FeedTech will give its customers recommendations based on their purchase, viewing, or activity history–and most kids on the feed trust these recommendations so much that they will follow FeedTech’s suggestions almost automatically, until the line between what a user actually wants and what FeedTech wants their users to want is blurred into irrelevancy.

The main character’s name is Titus, a normal, feed-connected teenager who meets Violet, a girl who is also connected to the feed but comes from a family of lesser means and more independent thought. Titus’s relationship with Violet leads him to reconsider his worldview. Together, they purposely try to confuse the Feed.

The voice in this book is both brilliant and potentially off-putting. The story is told in first person, Titus being the narrator, and since Titus’s mind is so atrophied from its dependence on the feed, his sentences are poorly formed, his vocabulary is weak, and he relies heavily on the futuristic, youthful slang and cursing that he and his friends use to communicate with. In dialogue, especially, you notice his and his friends’ woeful inadequacy with the English language. However, as he gets to know Violet better, and as he starts to start thinking apart from the feed, he gradually expresses himself with more sophisticated language. Even by the end, though, Titus isn’t Hemingway, and his generally poor English and his and his friends’ frequent use of slang and swear words might annoy some readers. I found it a little hard to get used to, but it wasn’t nearly as weird as reading Anthony Burgess’s A Clockwork Orange, where I felt like I basically had to learn a new language as I read it.

Feed presents us with a dismal future that cannot be blamed on Big Government. In fact, government is hardly to be seen in Anderson’s dystopia. Instead, the reason for America’s decline is due to corporations that have become massively successful only because they have given their consumers what they want. And in that sense, the only ones to blame for this future are ourselves, the consumers, self-appointed slaves of the Feed.
Buy on Amazon
See awards this book has won, plus an explanation of how Anderson came to write Feed, by viewing the author’s website: http://mt-anderson.com/blog/his-books/books-for-teens-and-adults/feed-2/