I have such a massive stack of “To Read” books that if I take the time to read a book more than once, it means I really, really love it. I read Storming Heaven by Denise Giardina for the first time last summer. It was probably the best book I read all year. I read it again at the beginning of this year, and it was even better on the second go. (Cool note—someone is adapting this for a musical which they hope to get on Broadway). Storming Heaven was written and published before I was born—how did it take me more than twenty years before I’d even heard of it? 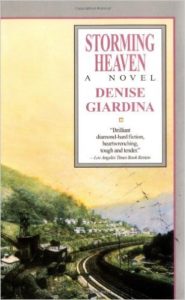 Storming Heaven is a novel of historical fiction (a genre in which I rarely find myself exploring) that tells the story of a few families from West Virginia during the years when the coal companies took over the land and mistreated their miners. Miners struggled to form labor unions that would fight for their rights, and those who joined the United Mine Workers did so at risk to their lives and the lives of their families.
Giardina tells the story of these miners’ struggle through four first-person narratives: C.J. Marcum, Carrie Bishop, Rondal Lloyd, and Rosa Angelelli. Rosa’s chapters were honestly a little confusing to me, as she is an Italian immigrant who ends up going a little crazy by the end of the book. C.J., Carrie, and Rondal were the main characters here, and I would say that the voices of Rondal and Carrie really added the most to the tale, especially since much of the plot revolved around their romantic relationship (or, at times, lack thereof).

C.J.’s family’s land was stolen from them by the coal companies early on, setting him against them before they even officially moved in. He is a good friend to Rondal’s father, and is instrumental in Rondal Lloyd’s upbringing, specifically in the way he encourages Rondal’s ideas about unionization. Rondal becomes a union organizer, fighting for the rights of the miners in southern West Virginia. Carrie grows up on a farm in Kentucky, but ends up as a nurse in a West Virginia coal camp, where she meets Rondal.

Carrie’s brother, Miles Bishop, was a secondary character which I found to be very important. The overall narrative is sympathetic to the striking miners and condemning of the coal operators (I would find it hard to see it otherwise, myself, but we all have our biases). However, Miles was one who worked for the coal companies, yet isn’t a villain—he did care to a degree about what Carrie told him about the miners’ living and working conditions. I felt that it was a nice touch that Giardina used Miles to illustrate that there were good people on both sides, even if it seems Miles is a bit misguided and willfully ignorant throughout most of the story.

The book is less than 300 pages, but it covers a lot of ground. With so many characters and locations, it can be a challenge to follow the first time around. The plot moves a little slowly, but Giardina does a great job of bringing her readers into the world of the 20th century southern Appalachian coalfields and exposing us to the miners’ plight. While the characters and even some of the places are fictitious, the story follows true historical events that are as unbelievable as any fiction. The crimes committed by the coal operators and their “detectives” against the miners are appalling, including an instance where an armored train carrying a machine gun was sent to shoot up a tent camp full of striking miners’ families. The book culminates at the Battle of Blair Mountain, when over ten thousand miners marched fifty miles toward Logan and fought opposing forces including local law enforcement, strikebreakers, and even the United States military.

While I had expected more focus on the battles fought, the bulk of the book is about the tensions and causes that lead up to Blair Mountain, with a focus on Carrie and Rondal’s relationship and how they strive to support the miners of southern West Virginia in their awful circumstances. Like I said before, the plot can be slow, but, like a meandering stream with sections of flat water and sections of turbulence, it comes together beautifully. This book is about the people, less so about the violence.
The prose is excellent: efficient, tight, and poetic. I never mark up my novels, but I found myself reaching for my highlighter to underline certain passages for the way they had grabbed me. It is written in an older, southern Appalachian dialect, which may be off-putting for some and just plain hard to read for others. Having grown up in West Virginia myself, though most people I knew certainly didn’t talk the way they talked back in the late 1800s and early 1900s, there were still enough similarities in the speech patterns that I was able to take it in stride with relative ease. Now that I’m living on the other side of the country, the characters’ voices were music to my ears—sounds of home, even if it wasn’t exactly the same way that folks in West Virginia speak today.

I’m having a hard time with this review. I’m trying to figure out how to explain just why I love this book so much, but for whatever reason it’s just not coming out the right way. Maybe it’s the history. How could these kinds of things happen in such a relatively recent time? And though miners are treated a lot better today, how is it that the coal companies still have so much control over politics in West Virginia? Maybe it’s the writing itself. I found myself thinking that Denise Giardina could be West Virginia’s Flannery O’Connor. Maybe it’s my homesickness. Though I am living in the Rockies now, and the magnitude of these western mountains is unrivaled by the Appalachians, C.J. Marcum’s words resonated deep in me when I read them: “These mountains has got a powerful pull. They let a man wander so far and then they yank him back like a fish on a line. I knew Rondal would sleep uneasy while he was away, and the hills would bring him home.” I know that I’ll return home someday, like Rondal, when my time out here is finished.

True, I grew up in a very different (and much better) time in West Virginia’s history. I didn’t even grow up in any of the old coal towns (my hometown actually was a lumber town, in its heyday—before my time). But even so, in urging you to read this book, I feel like I am sharing with you my home.
Buy Storming Heaven on Amazon
Read more about the West Virginia Mine Wars